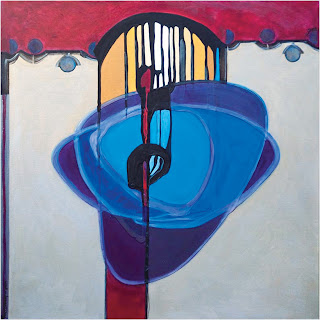 It was appropriate that the first painting in this series be the Sh'ma.  Afterall, they are the first 6 words taught to children, often before formal Jewish education begins.  It was no coincidence that the identifying words of our faith would herald the beginning of the Judaic series. Neither was it an accident, as described in my first post, that 12 drips, representing Jacob's sons be a message
for me to move ahead with Judaic work.

As the painting unfolded, my mind turned to 4 pivotal words: Adonai, Eloheynu, Adonai, Echad  (Lord, Our G-d, Lord, One).
With ink bottle in hand, I formed 4 corresponding circles in the center of the canvas.
The cantillation marks that denote how to chant these biblical words were painted across the top of the canvas and a strong, red vertical, anchoring the composition, sliced through the composition.

Color was added in a symbolic fashion as well. As with this first painting, the color red would come to represent G-d. Metallic shades of silvers or coppers would symbolize the heavenly realm.
Being the first of the series, I wanted to utilize a primary color palette of yellow, blue and red.
Once I settled on blue, my mind turned to the mysterious techeilet  blue, mentioned in Torah to be used to dye a thread of the Tzitzit.  All of the concentric circles that formed the bull's eye pattern became shades of blue. The single shaft of red anchors the design as G-d anchors our lives.

The complete series can be found here:JUDAIC SERIES
If you have a special request for a specific prayer, blessing, proverb, psalm, please contact me directly CONTACT
Posted by Unknown at 4:45 PM